Helsinki’s goal is to be carbon-neutral by 2035. Currently, about 56 % of Helsinki’s carbon dioxide emissions originate from the production of energy used for heating. In order to reach the carbon-neutrality goal, Helsinki needs to significantly reduce those emissions, in addition to other actions.

Helsinki Energy Challenge is currently being prepared. Further details and detailed instructions for participation will be published at the official launch of the Challenge.

Helsinki is located on the south coast of Finland, and the population of the city is concentrated in the coastal area. Due to the cold climate, heat demand is strongly correlated to weather, and the capacity needed to produce heat on cold winter days is substantial. The volume, variation, and the location of the heat demand means that it has been challenging to find a replacement for fossil fuels. Currently, more than half of the district heating, which is the main method of heating in Helsinki, is produced with coal. In 2018, total district heating produced was 7 200 GWh; 53 % of it was produced with coal.

In Helsinki, the city-owned energy company Helen is in charge of the production, distribution and sale of district heating. Coal is used mainly in cogeneration of power and heat and in trigeneration, where power, heat and cooling are produced in one process. The coal-fired CHP plants are located in Hanasaari and Salmisaari, near the city centre, and there is also one coal-fired heat boiler in Salmisaari. Helen has made a decision to shut down Hanasaari coal-fired CHP plant by 2024, and also the coal-fired units in Salmisaari need to be shut down or converted to other fuels by 2029. This is due to the Finnish governments’ decision to ban coal use in energy production in 2029.

New sustainable solutions are needed to supply Helsinki’s heat demand. Currently different solutions to replace coal in heat production are being analysed, and also energy efficiency improvements will decrease the need for heat. As the amount of coal to be replaced is large, the current indicative plan to replace it would result in relatively high utilisation of biomass in heat generation.

However, biomass is not a sustainable solution either. The combustion of biomass has impacts on climate and logistical challenges may be considerable, especially if biomass has to be transported into the city centre. Therefore, the City of Helsinki wants to look for new solutions to replace coal in heat production with other means than biomass.

More information will be provided closer to the launch of the Helsinki Energy Challenge.

Key facts of the district heating system in Helsinki 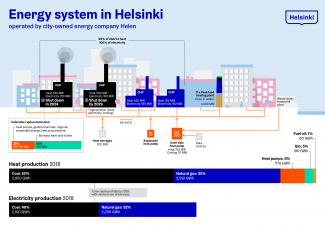 The district heating system in Helsinki is designed to produce heat based on the varying demand from residential buildings, service and the public sector, as well as from industrial clients. Due to the cold climate, the heat demand is at its highest during the winter months, when the buildings are heated. During summer time, district heat is used mainly to supply domestic hot water.

The demand described above is currently met with the district heat production capacity located in Helsinki, which consists of large heat and electricity cogeneration plants utilising coal and gas, heat pumps, biomass pellet boilers and fossil fuel boilers that are used to cover the peak demands. 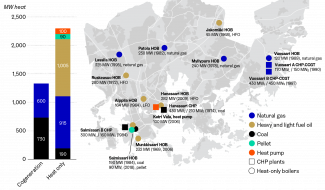 Heat pumps and cogeneration plants typically provide the base load heat production, i.e. they are used the most. When the demand is at its lowest, such as in summer time, heat pumps can fulfil the heat demand. During cold winter days, both all the base load capacity and the peak capacity, such as natural gas-fired and oil-fired heating stations, are needed. 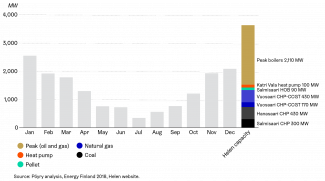 The coal-based heat production capacity, which is to be replaced, encompasses the CHP-plants in Salmisaari and Hanasaari and the heat boiler in Salmisaari, and it amounts to around 920 MW in total (as heat power, with an added 380 MW as power production capacity). The compensatory production constructed thus far amounts to 112 MW: a pellet heat plant in Salmisaari and a new heat pump facility under Esplanadi. The heat pump investments (the Esplanadi pump deployed in 2018 and the upcoming additional pump at the Katri Vala facility) produce heat power of around 40 MW, i.e. less than 5 % of the coal capacity that will be retired. Helen is also investing in a large heat storage facility, which is being constructed in Mustikkamaa. It will make it is possible to store heat produced with renewable sources of energy and to reduce the use of fossil fuels.

The use of biomass has been included as a component in the plans for replacing coal in the heat production. According to Helen’s plan, biomass will be used in new boilers, of which the largest is planned in Vuosaari. There, Helen is planning to invest in a heat boiler with a 250 MW capacity, which would replace about one fourth of the coal used in Hanasaari. After Hanasaari, Helen will need to decommission or convert the Salmisaari coal-fired units as well, latest by 2029. For that replacement, no investment decisions have been made. 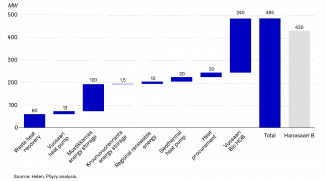 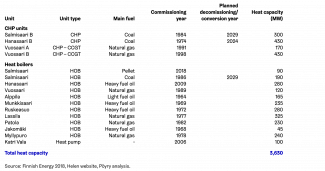 More information will be provided closer to the launch of the Helsinki Energy Challenge. 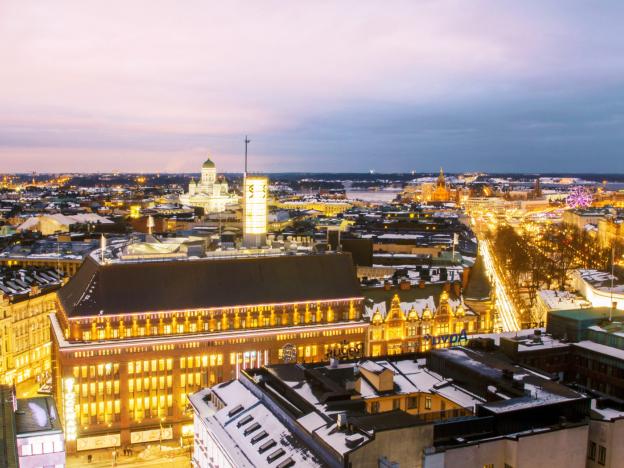 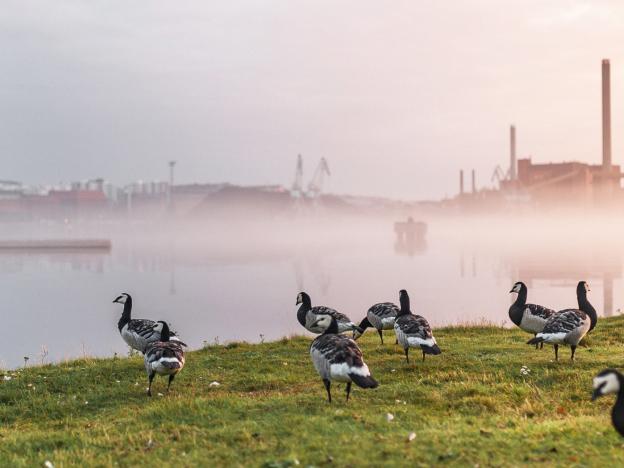